I find the majority of furniture I use on craigslist, and the biggest skill you need to aquire to succeed there is persistence. It only takes a few minutes to do a targeted search, so I will search at least once a day for whatever I need until I find it. . I usually limit my search to furniture by owner, under a certain price, with an image. I also keep google maps open in a separate tab so I can search for locations as well. It can be a pain to fall in love with a table, have the designer fall in love with a table and then realize that I have to drive an hour to pick it up. Any item that I think is interesting I send in a link to the set designer with my thoughts ("this one is my favorite", "this might work if we repainted it" etc.). If I am worried about timing I sometimes call or text the designer as well to let him know to check his email.
Once I get a reply from the designer I email the seller. I get the best response from sellers when I am brief (no need to tell them who I am or why I need their chair), I include my phone number and email address, and I include a list of times when I would be able to pick up the item over the next few days.
An exception to the brief post rule is when I can't afford something. If I have come across something unusual that I need, I start using the other bargaining tools in my bag of tricks. I can offer the rent the item, borrow the item and advertise in the program or with a sign in the lobby about where it could be purchased. If the theatre is non-profit I have the extra incentive of providing a letter of donation for tax purposes. I have offered comp tickets before and have even offered tickets to other shows (this spinning wheel is for theatre X, but the seller lives closer to theatre Y where I just designed a show and was given two comp tickets that I wasn't going to use).
Sometimes people don't reply. Sometimes you email 4 different sellers and they all write back to say the item was taken. In the end persistence is key. I trust that the item will show up, and it usually does.
To make my records neater and more professional I purchased a receipts book from Staples for around $5. I used to hand write a receipt on whatever scrap of paper I found in my car. This little book is simple, and I often don't know quite what to write in some of the blank fields, but it looks much more professional and is far less likely to disappear when I am cleaning out my car.
Always bring cash, and make sure you have exact change. I recently paid $39 for a table and chairs that was posted for $35. I stopped at an ATM on the way to the house, got $40 and the seller only had $1 cash on him to give me change.
Posted by Jesse Gaffney at 9:54 AM No comments:

Email ThisBlogThis!Share to TwitterShare to FacebookShare to Pinterest
Labels: shopping

I explained some of my paperwork a few months ago, in the My Process postings, but I thought it might be much more useful if you could see some of my props lists.
I keep my props lists on google.docs and I send the link to stage managers, directors, designers and anyone else who I think could benefit from seeing it. I try to keep the list as up to date as possible, so that if a stage manager has a question about whether I got a note, or whether a prop in rehearsal is supposed to be final, she can check back at the list.
List to list the only thing that really changes is the page id in the third column, which is entirely for practical purposes. Ideally the column would always read act.scene.page, but not all scripts are structured that way, and the entire purpose of the column is to help me find the point in the script for a reference when I need it, so I just use whatever seems most practical.
Keep in mind too that this is an ever changing process, I've been tweaking the format over time and I'm sure I will continue to.

Christmas Carol List- So this all fit on one sheet to print I cut the first column to X for done and R for rehearsal prop.
DNA Trail List- Since this play was actually a festival of seven short plays, I created a different list for each one, you can navigate between them using the tabs on the bottom.
Drowsy Chaperone List
End of the Tour List
Posted by Jesse Gaffney at 9:13 AM No comments:

I think I've said before that pears are one of the most versatile foods you can find when it comes to edible food props, and here is another example.
In "Menorca" there is a scene when a group of students comes back from a shopping trip with bags of food from  Burger King. The director agreed that since the scene was so short we didn't need to worry about the burgers being edible, so for those I molded extra model magic I had from other projects into burger shapes and wrapped them in Burger King paper.
To give them something to do, it was decided the students would be eating fries. The director's biggest concern was the smell (we don't want the audience sitting and thinking about how much they want Burger King instead of thinking about the show), and my biggest concern was cooking (I'd either have to find microwavable fries, send someone out to the Burger King around the corner before the show each night or have the actors eating cold fries). Pears solved both problems and as an added bonus the actors appreciated having something refreshing and healthy in the middle of the show instead of salty and greasy. The ASM cuts up three pears before every show (one for each fry cup). 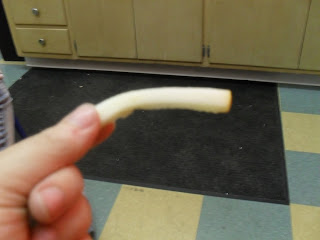 The pear slices are just about the perfect color, just flexible enough and the yellow ends even look like the darker ends of fast food fries. 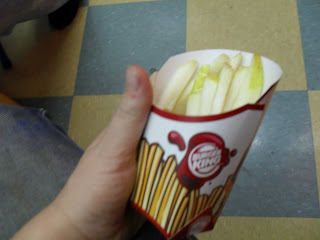 The only drawback is that the fries are slightly too short. You definitely want the smallest fry cup and tallest pears possible to help with the illusion.
Posted by Jesse Gaffney at 12:00 PM 4 comments:

Sick of the "right to fail"

The final speaker at the Chicago Theatre Anti-Conference a few weeks ago was Roche Schulfer, the executive director of the Goodman.

Mr. Schulfer listed his "top ten opinions about theatre today" and many of the ideas were fantastic and challenging. The one that surprised me, and has stuck with me the most though, was when he said, "I am so sick of  the 'right to fail.'" I hadn't realized that I was, but the more I think about it, I am too.
We want to give artists freedom to experiment, and trust them to stretch their imaginations and push the boundaries, but we are not doing this because they have the right to fail. We are doing this to give them room to succeed.
Schulfer compared this to a sports team. A true fan will love them if they win or lose, but we don't give the coaching staff freedom to try new things because they have the "right to fail." We also expect that if a new defense scheme results in in the team getting humiliated and blown out by an inferior team, the coach will apologizes, regroup and try something else that he thinks will succeed.
Far too often I have heard artists stubbornly defend work that didn't succeed. "The audience just didn't get it," "It's the process that's really important." When what they should be saying is what we hear from a defeated football coach, "We weren't as prepared as we should have been," "We're going to regroup, learn from our mistakes and try to be better next week."
Like football fans, your audience wants you to succeed, and will hopefully come back next week to watch you try again. Like a loyal fan, your audience "deserves a win." Also like a loyal fan, your audience might come back multiple times hoping to see a win (if they like you), but if you blame the fans when you lose, refuse to admit that you lost, and refuse to learn from your mistakes, the fans will eventually give up on you.
Posted by Jesse Gaffney at 11:39 AM No comments:

One of the shows I'm working on, Menorca at 16th Street Theatre in Berwyn, takes place partially on an archeological dig site. One of my tasks was to create a set of ancient artifacts that could be discovered by the students at the dig.
These particular artifacts were supposed to be mysterious. The students and the professors on the dig site are having trouble identifying them or making the pieces fit together.
The first piece they find is a rowel (the round spiky piece that turns on a spur). To make the base I used some small machine screws joined together with an epoxy putty center. 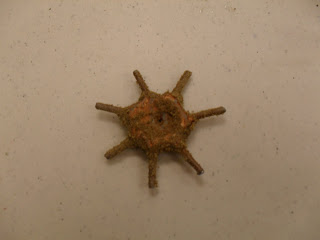 I painted it with a bronze paint and then coated it with Elmers glue and sand so it looks like it came directly out of the ground.
The second artifact they find is an ankle bracelet. I bought a cheap gold bracelet from  an antique store for the base. 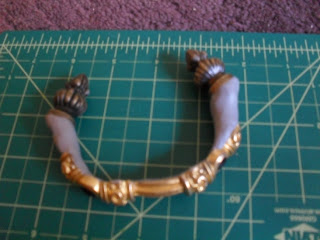 I bent it out to make it more like an ankle bracelet and then added two lamp toppers to the ends with epoxy putty. Side note, if you have never checked out the lamp parts section at your local hardware store, you should. 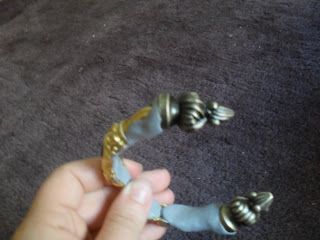 Then a coat of bronze paint, some different brown sprays and sand and elmers to finish it off. 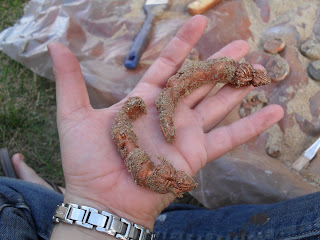 The third artifact was a rosary. The script designates that it is made of large glass beads, so I found some rough African glass beads at a local bead shop.
In order for the beads to still be strung when they were found they needed to appear to be strung on something that would have survived years in the dirt. 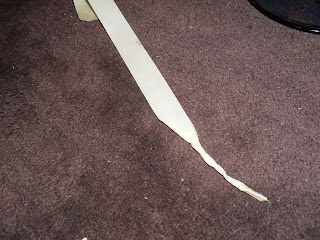 I ended up twisting masking tape to make a string that looked like it could be some sort of sinew. 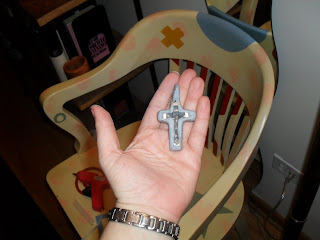 I made the cross by forming epoxy putty around a smaller cross that I found in the thrift store. 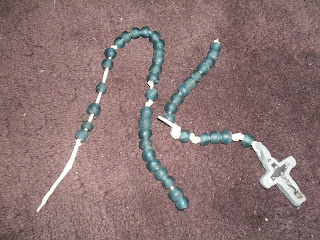 All strung together it looked pretty good, though I think I will end up breaking some of the beads off (it looks a little too complete). 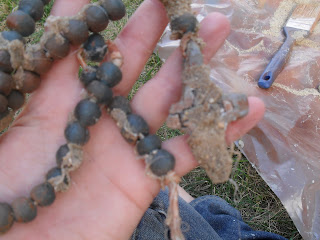 Then sand and paint and a little bit of smashing to the cross and it's ready to go.
Posted by Jesse Gaffney at 12:30 PM No comments: