I made this quick window awning for Living Large in a Mini Kind of Way at 16th Street Theatre. We had a limited budget, and needed to build the awning to fit the small window on the set, and wanted the sides to remain open to keep the awning feeling light and decorative (thus eliminating the easiest solution of building a hard structure and covering it with fabric. 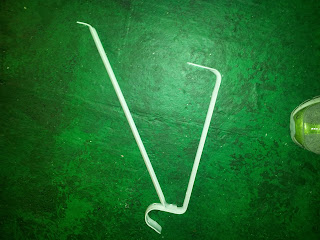 I found these shelf brackets with closet rod hooks on ends at Menards. By turning them upside down I was able to get the perfect shape for my frame. 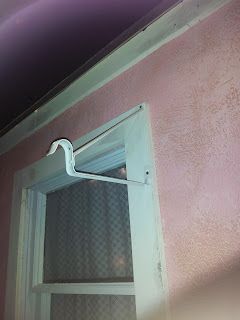 Bonus- they are pre-drilled to screw directly into the set. 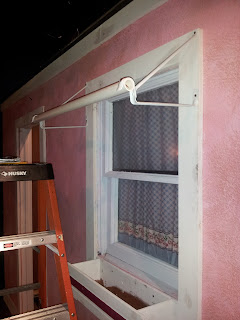 I cut a small piece of PVC pipe to fit between the two brackets and screwed it into the closet rod hooks (also already pre-drilled for me). 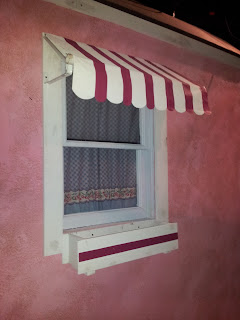 Then all I needed to do was staple the fabric in on the top, and secure it along the bottom with some double stick carpet tape along the PVC.
The fabric of the awning was just standard muslin which the set designer painted. Because the fabric was stiffened so much by the paint, I was able to cut the curves into the end without needing to do any stitching or sealing to prevent fraying.
Posted by Jesse Gaffney at 12:00 PM No comments:

Email ThisBlogThis!Share to TwitterShare to FacebookShare to Pinterest
Labels: construction, fabric, Living Large in a Mini Kind of Way, quick-rig

About a year ago, when someone initially described this trick to me in a production meeting, I looked at him like he was crazy. "There is absolutely no way that will work, "I told him. But of course it did, and I had to admit I was wrong. So here is an explanation of how to create a very easy, very effective system for running water onstage. 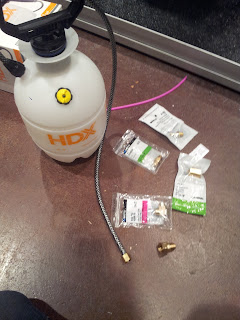 First, the tools. The core of the system is a hudson sprayer/garden sprayer. These are available in the garden section at most hardware stores, but be aware they can be a seasonal item at some places, so you may have to order one and wait for shipping in the winter months. 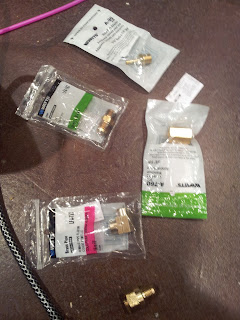 Then you need fittings that can allow you to attach the sprayer to your sink/water spout/drinking fountain etc. 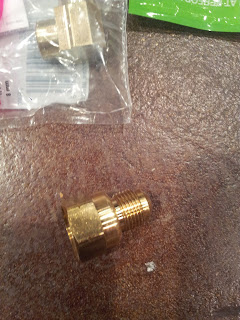 I bought this specific fitting to fit onto the tap of the sink. 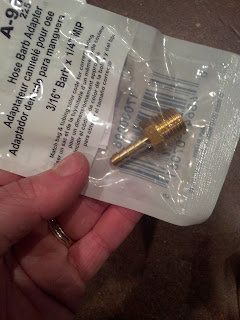 And this one, with the barbed end to fit into the end of the hose of the sprayer. 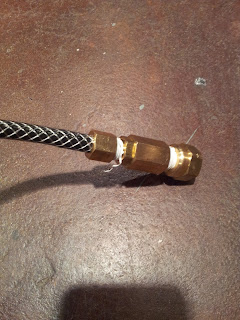 Then a few connectors in between that step up sizes and connect mismatched ends to make it all fit together. You will notice I used thread tape (available in the plumbing section) on all of the connections between the pieces. It is important that your system holds air pressure, so you will need a tight seal on all joints. 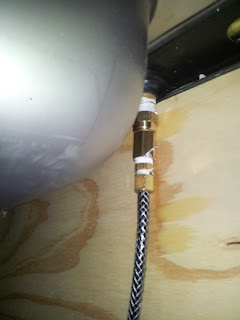 Then the system is connected to the sink that the tech director had installed in the counter. 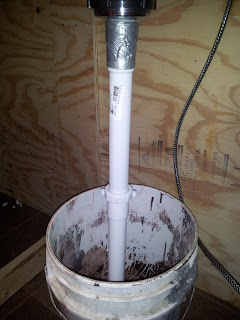 And we attach a pipe down through the sink sink drain into a bucket, so that the water draining out didn't make an unnatural sound. 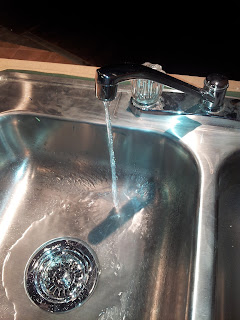 And when you pump the garden sprayer and then turn on the faucet, you get a nice steady stream of water.

Now to explain why it works:
The way the garden sprayer usually works is that, by pumping the top handle you create an excessive amount of pressure in the canister. When the handle is squeezed on the sprayer, the pressure has a way to be released. since the hose is attached to a straw, down at the bottom of the canister, the liquid at the bottom of the canister is the first thing to be pushed out through the hose.
When you disconnect the hose from the sprayer, and connect it to a faucet, you get the same result. The system is closed and sealed until the faucet is turned on. At that point the pressure inside the canister forces the water out though the hose, and out the faucet.

Please remember that you are only connecting to either the hot or the cold side of the sink. I connected to the cold, if the hot also got turned on, it resulted in an open spout in the system, and the water was allowed to go where it was not intended (creating a temporarily confusing mess).

We also had a problem on this show because the garden sprayer was particularly cheap, and the effect occurred very late in the performance. Before during tech rehearsals we noticed that, while the system would function perfectly while setting up, by the time we got to the moment in the show, we would be getting no water. The pressure in the tank was slowly leaking out over the course of the show. The simple solution in this case was to run the hose out the back wall of the set to allow the ASM to pump up the tank just prior to the moment when it needed to work.

For Living Large in a Mini Kind of Way at 16th street theatre, we decided that in the last scene it be great for the two characters to be gardening while they talked. The director asked if I could provide supplies for the actors to fill three flower pots that could fit into the window box (which is filled with obviously fake flowers for the rest of the show). 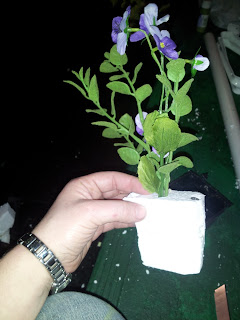 I started by purchasing the most natural looking small flowers I could find at Michaels. I found some pansies that looked right, and a stem of greenery that matched the leaves nicely. The pansies also made sense becuase they were one of the few fake flowers I could find that is actually sold in small flats of annuals at nurseries.
I cut small pieces of the flower stem and the greenery and pushed them into chunks of styrofoam. Gethsemane nursery and garden center in Chicago was able to help me out by giving me some empty plastic containers that the annual flowers would come in, and a flat tray to hold them (they are my go-to location for anything having to do with plants or gardens in Chicago). 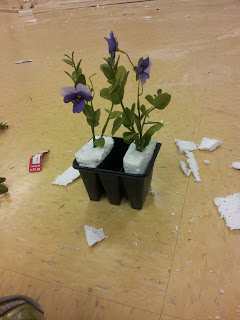 I carved the foam away so that each piece fit nicely into the slots in the container. 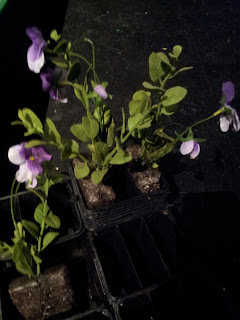 and then I painted them all with a coat of van dyke brown paint. 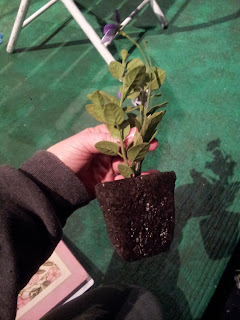 The result was very convincing and effective, and looked great as the actors placed them into real pots, and then used a small spade and their hands to fill in around them with real potting soil (which could be reused nightly). 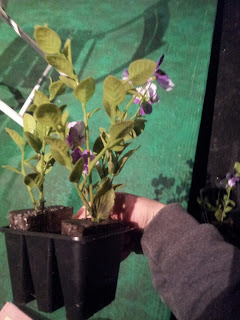 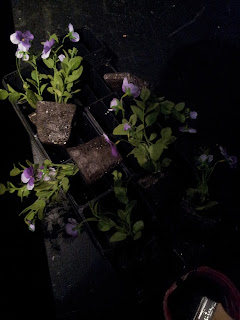