To All The Small Theatre Companies

I had a wonderful meeting with a woman the other morning. She is planning to produce her first storefront show here in Chicago, with the hopes of continuing to produce with the same group as a new theatre company. We talked a bit about resources here in Chicago, the way tech tends to be scheduled, things that are typically written into designer contracts, and payment schedules.
She also asked me a very interesting question- What makes me want to work with a company that can't pay me what I'm worth? What can a small company offer to me as an artist, besides money, to make me want to work with them.
I gave her a long list, and I figured, why not share it with anyone else who could use it.
In no particular order:

For The City and The City at Lifeline Theater we had been using this old mission style desk from stock for a rehearsal furniture piece. I was having a bit of trouble finding a final show piece in our budget that was long enough to fit four people seated and thin enough to fit though an incredibly narrow doorway. 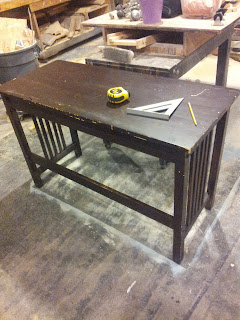 Eventually the designer and I had a discussion and decided that maybe we already had the perfect piece, it just needed some adjustment to make it look a bit less recognizable as a mission style desk. 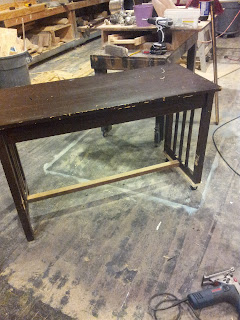 I started by removing the stretcher from the front side, and replacing it with one center. 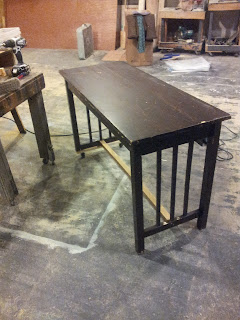 I also cut out two of the five slats on each end to get rid of the distinctive mission style look. 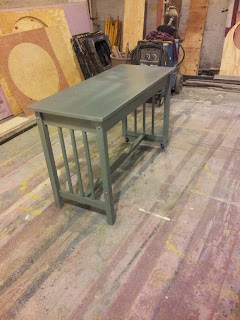 I cut the legs on one end and added castors so that the table could be moved easily, like a wheelbarrow by one person. 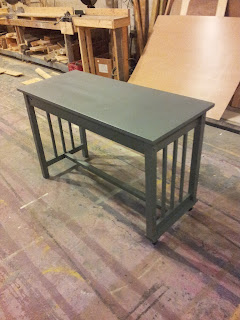 Add some silver paint and a coat of hammered steel spray paint for texture and we ended up with a table that is believable in a morgue and looks appropriate in a conference room as well.
Posted by Jesse Gaffney at 12:00 PM No comments:

Email ThisBlogThis!Share to TwitterShare to FacebookShare to Pinterest
Labels: design process, furniture, The City and The City

The evolution of a weapon

In the The City and The City at Lifeline Theater I had a very interesting design challenge. The play takes place in a fictional alternate reality, that is very realistic and similar to our own. Part of the show takes place at an archaeological dig and over the course of the show we hear that there are rumors about the artifacts being found there, "strange physics," "magic properties" etc.
In the final scene the audience gets to see one of these magical artifacts. The villain is holding a piece and threatening the detective with it, "do you want to see what it can do?"
I needed something that looked like it could be centuries old, but still technologically advanced, and that could plausibly keep the detective on edge about what kind of threat it was. 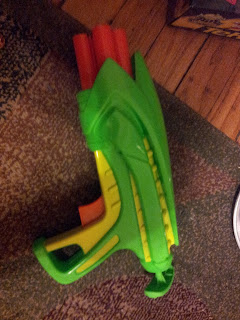 This was the Nerf weapon that I started with as a base. 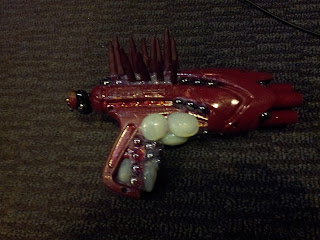 I spray painted it this cranberry color, then used spikes made out of bake-able clay, marbles and stones to create this look. It was all wrong, and yet I wasn't sure quite how to fix it. It looked far too "gun-like" it's function seemed obvious, and it's design was far more "Lost in Space" than ancient artifact. 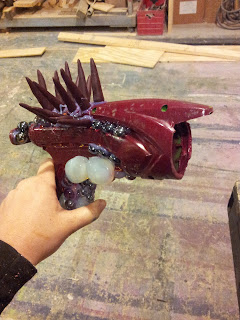 For round two I removed all of the dart holders and firing mechanisms from the front of the gun. I figured shortening the barrel would make it less obviously gun-like. 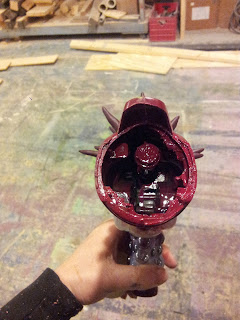 The bits of plastic and rough cut edges inside also made it look a bit more antiqued and less polished. 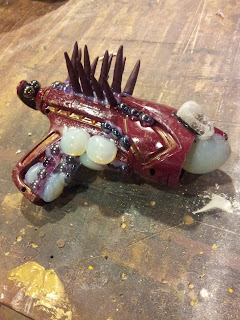 Then I added more stones, crystals on top, and a round white "magic-egg" (that was what it was labeled as in the store) on the inside. 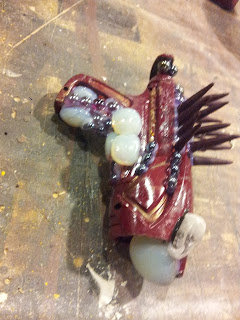 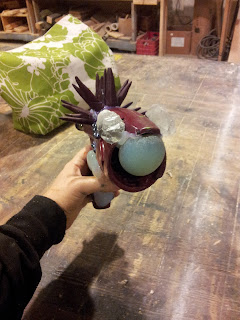 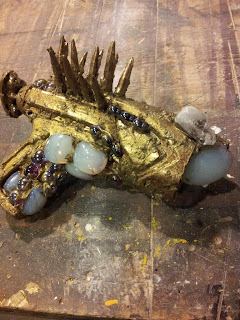 I still hated the look of the piece after the second draft was done. I decided the finish was the problem. It was just too smooth and plastic-y to have believable been in the ground for centuries. I mixed a handful of sawdust with some metallic paint and covered everything but the stones. 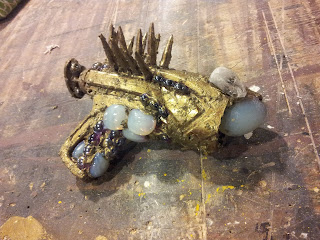 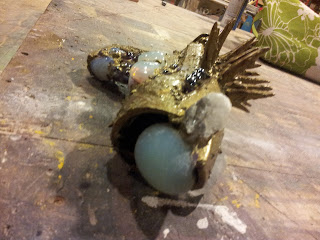 Finally I was pretty happy with the piece, unfortunately the play-write and director were not. Because of the way the scene was blocked, the audience ends up staring directly down the barrel of the gun for the majority of the scene. The white egg wasn't reading as magical, and the way the handle was held made it still feel too much like an altered gun. 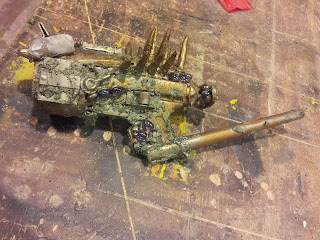 For round four I cut off the bottom of the handle to force the actor to grip the piece differently. I then added a tapered dowel to the bottom of the handle to add a second stabbing weapon to the piece.  I removed the white stone egg, and added springs, washers, nuts, and other random hardware to make the magic of the piece feel more like a technical marvel than the fair tale magic feeling all those stones were giving it. After adding these pieces, I did another coat of a different colored metallic paint and sawdust to add a corroded look to the mechanisms. 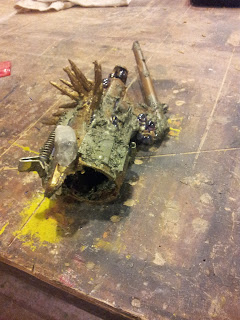 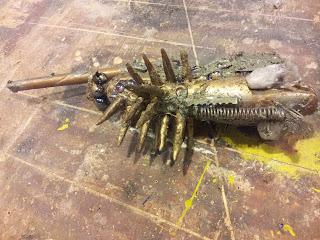 Finally, everyone was happy with the weapon. 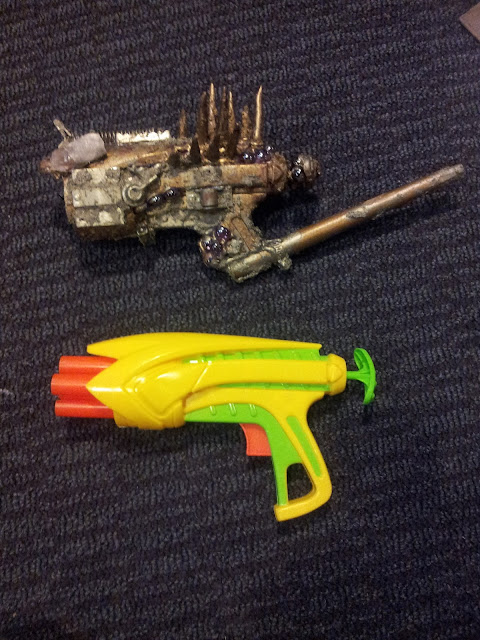 And because the nerf guns came in a two pack, I got to get this awesome before and after picture.
Posted by Jesse Gaffney at 12:00 PM No comments:

Email ThisBlogThis!Share to TwitterShare to FacebookShare to Pinterest
Labels: construction, design process, paint, The City and The City, weapons

For The City and The City, at Lifeline Theatre we had the interesting challenge of attaching fliers and posters to the walls over the course of the show, and then needing to take them down halfway through. We experimented with various poster putties and sticky dots, but they either didn't reliably stick to the walls (nothing like pieces of paper randomly falling during serous moments to distract actors and audience members), or they stuck too well and took paint with them when they got pulled off quickly. 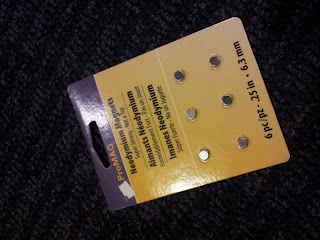 For our final solution we ended up using magnets. I purchased these tiny, super-strong magnets at Michael's. 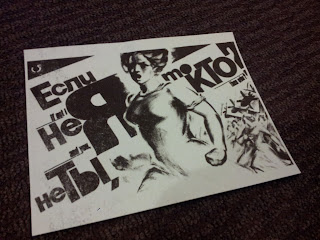 And I attached the magnet to the back of each poster by placing it underneath a large strip of clear packing tape. 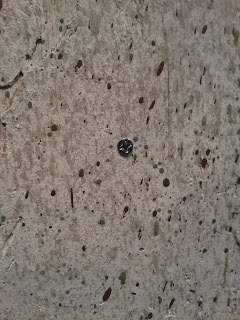 I added slightly larger silver screws to the walls in the places I wanted to hang the posters. 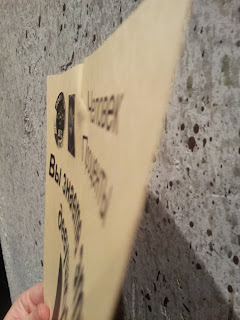 The magnets were strong enough that as long as the actor started by lining up the poster close to the correct spot, the magnet would grab the screw and leave the poster easily hanging in position. 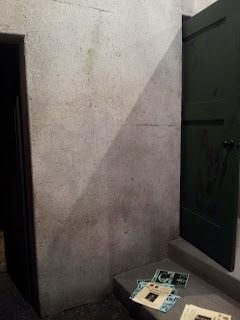 From a distance the screws completely disappeared on the textured "concrete" wall. 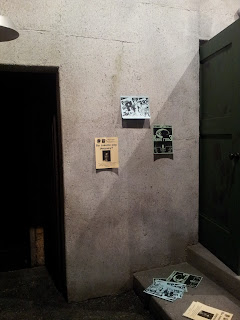 And here it is filled with posters 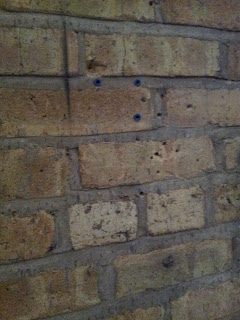 I was a bit worried about how to do the same trick on the brick side wall of the theatre, but as it turns out, there had been plenty of concrete anchors installed in the wall for various shows over the years. 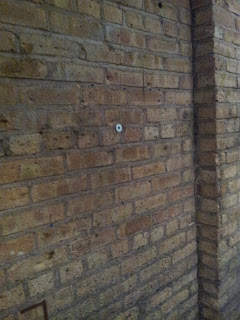 I picked to anchors in spots roughly where we needed posters, and screwed in a washer to make the spot visible to the actor. 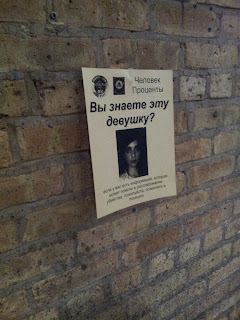 They were able to stick posters to the brick wall just as easily as the built set wall.
Posted by Jesse Gaffney at 12:00 PM No comments: