These are a few of my favorite things

No real direction to this post, just a random list of favorite products, reliable techniques and fun tricks.

-I'm slowly falling in love with Google Documents- If I make the props list for a show in Google Docs, instead of just as a file on my computer, I can send a link to it to the rest of the production team. Then they can check in throughout the process to see how different props are progressing (and save a "did you get the note that..." email)

-I love epoxy putty- I always keep some around for little fixes. Just recently I have used it to:

and I've used it a dozen other ways in the past. On top of that it's cheap, readily available at any hardware store, and comes in an easy tube you can just throw in your tool box for when you need it.

-Sewing as a means of attaching- When glue can't be trusted, or won't seem to work, my favorite trick is to "sew" things together. I drill small holes and use heavy-duty thread to literally stitch one item to another (in the same way you would attach a rigid button to a fabric shirt). I mentioned this before when describing the Full Monty car but I wanted to emphasis the many uses.

I discovered this trick when working on Hello Dolly. The waiters all needed trays with straps on the bottom so that they could do all sorts of dancing and acrobatics without loosing their trays. We tried one type of glue after another, but eventually they all gave in to the torque of the trays twisting and turning on the dancer's hands. Our final solution was to drill small holes in the trays and stitch through those holes into the fabric strap on the bottom. We used heavy-duty thread, and it took the stress better than any adhesive we had tried. Since then it is my go-to attachment method when I am attaching anything to fabric. 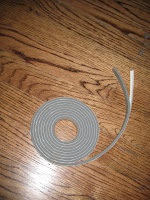 -High Density Foam Tape- It's just weather stripping, like you would use for the windows in your house. It is cheap (about $3 a roll) comes in different widths and thicknesses and again is readily available in a hardware store. I discovered it when TDing a show where two sliding walls were operating on a traveler track like doors. Every time they would come together they would make a banging noise and it was driving the director crazy. I bought one roll of the foam (sticky on one side) and ran it down both walls. It took two seconds, solved the problem, and made it even easier to close the doors and not leave any sort of gap in the middle.

Since then I like to keep it to use to add just a little extra padding for noise reduction, actor comfort, scenery protection or just general safety. 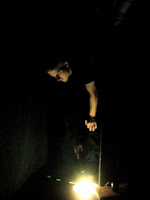 -I just watched a stage manager go around prior to a show and "charge" all the glo-tape quickly with a camera flash. For those who don't know, glo-tape is a glow-in-the-dark tape used on stage to help actors and crew avoid running into things, or falling off levels in the dark. Like anything glow-in-the-dark it needs to be charged before it will work. As a freshman in college I remember walking around with a flashlight before the show every night "charging" each piece of tape for 2 minutes. Turns out one bright concentrated flash of light from a camera does the job just as well and saves a ton of time!