These western honky tonk sconces were created for the production of Always...Patsy Cline running right now at Peninsula Players Theatre. I went into the process thinking I would purchase something, and very quickly discovered that nothing like the designer's research image existed anywhere I could find.
I briefly toyed with the idea of purchasing a set of 6 of the most basic sconces I could find, and altering them, until the master electrician mentioned that he was hoping to clean out the chandelier stock this year. We were able to find a particularly ugly one (unfortunately I forget to get a photo) and cut the arms off of it, The resulting pieces, below, were my starting point. 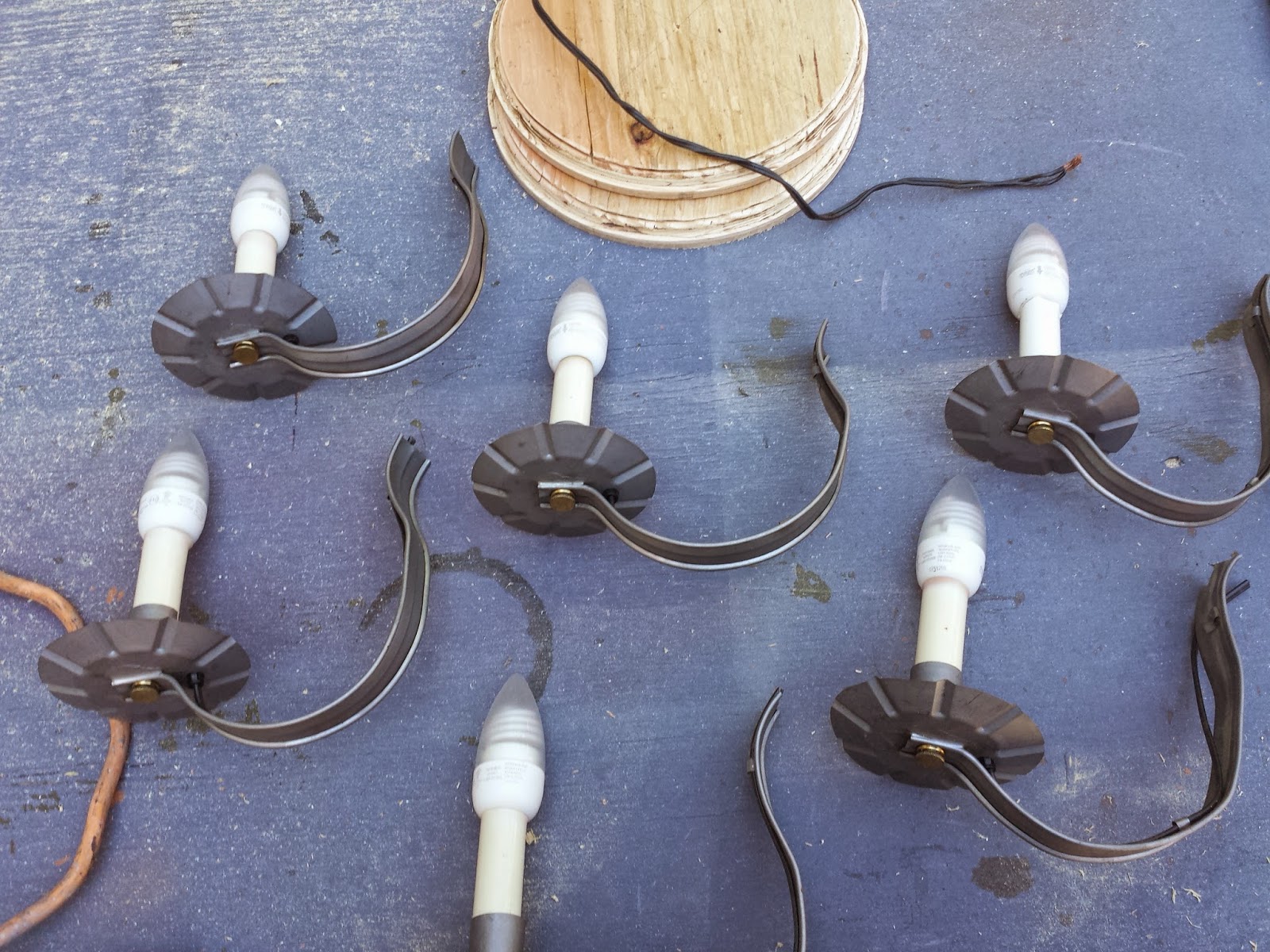 Cutting the pieces off resulted in some pretty bent up ends. 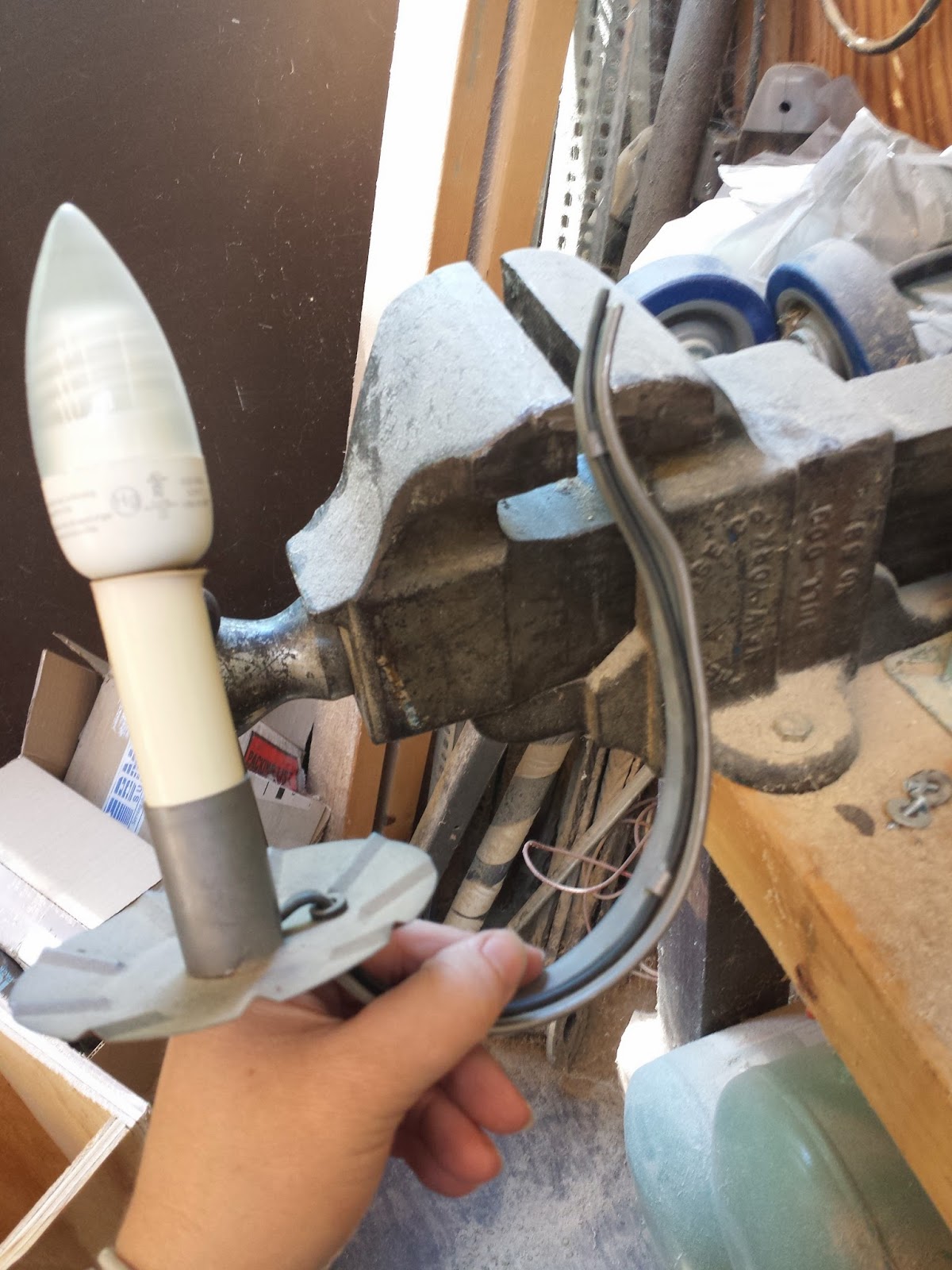 To flatten them out, I tightened each one as far as I could into the bench vice in the shop, resulting in nice flat metal arms. 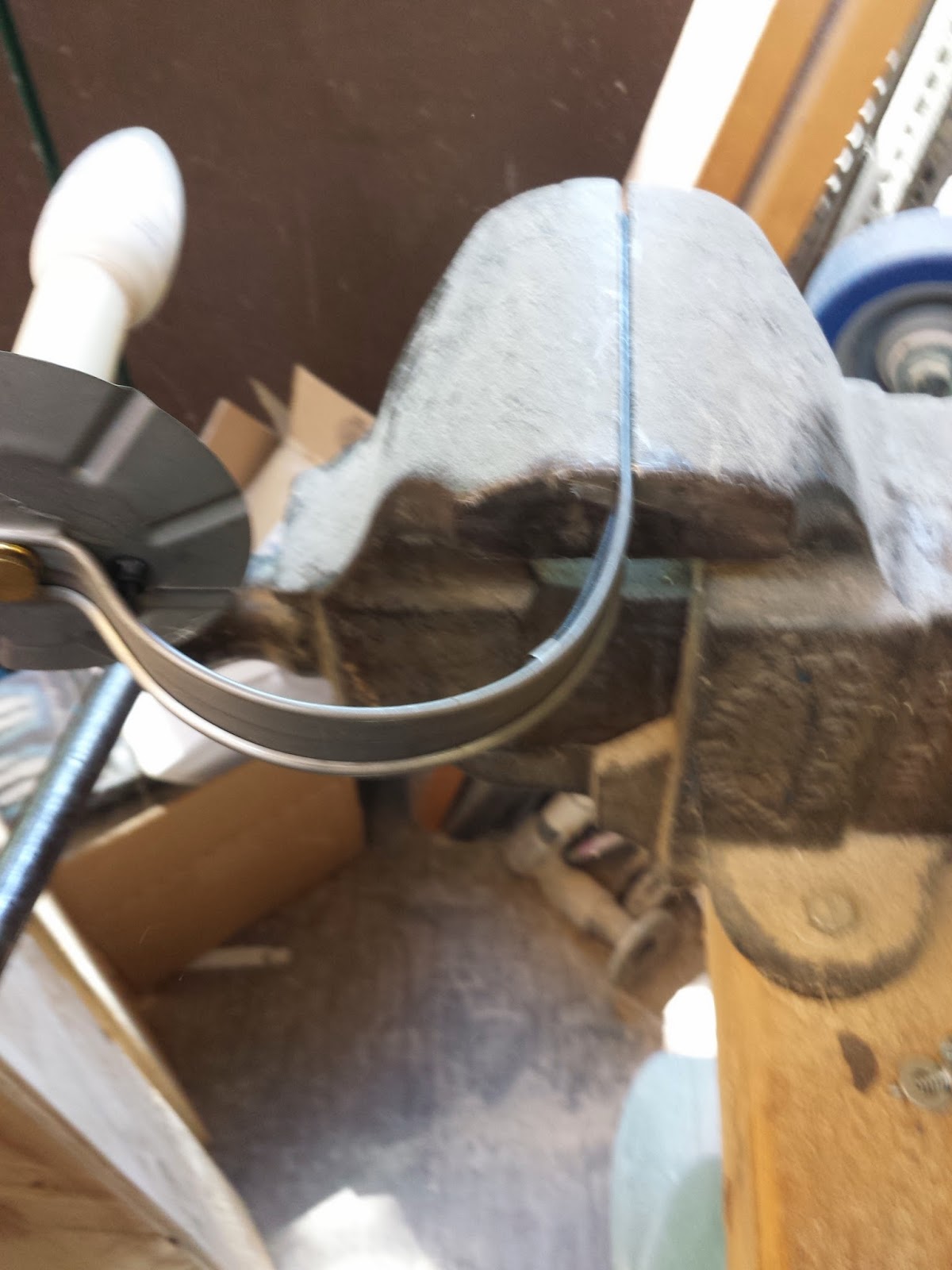 To create a more substantial base, we used these PVC reducing size connectors, painted copper. 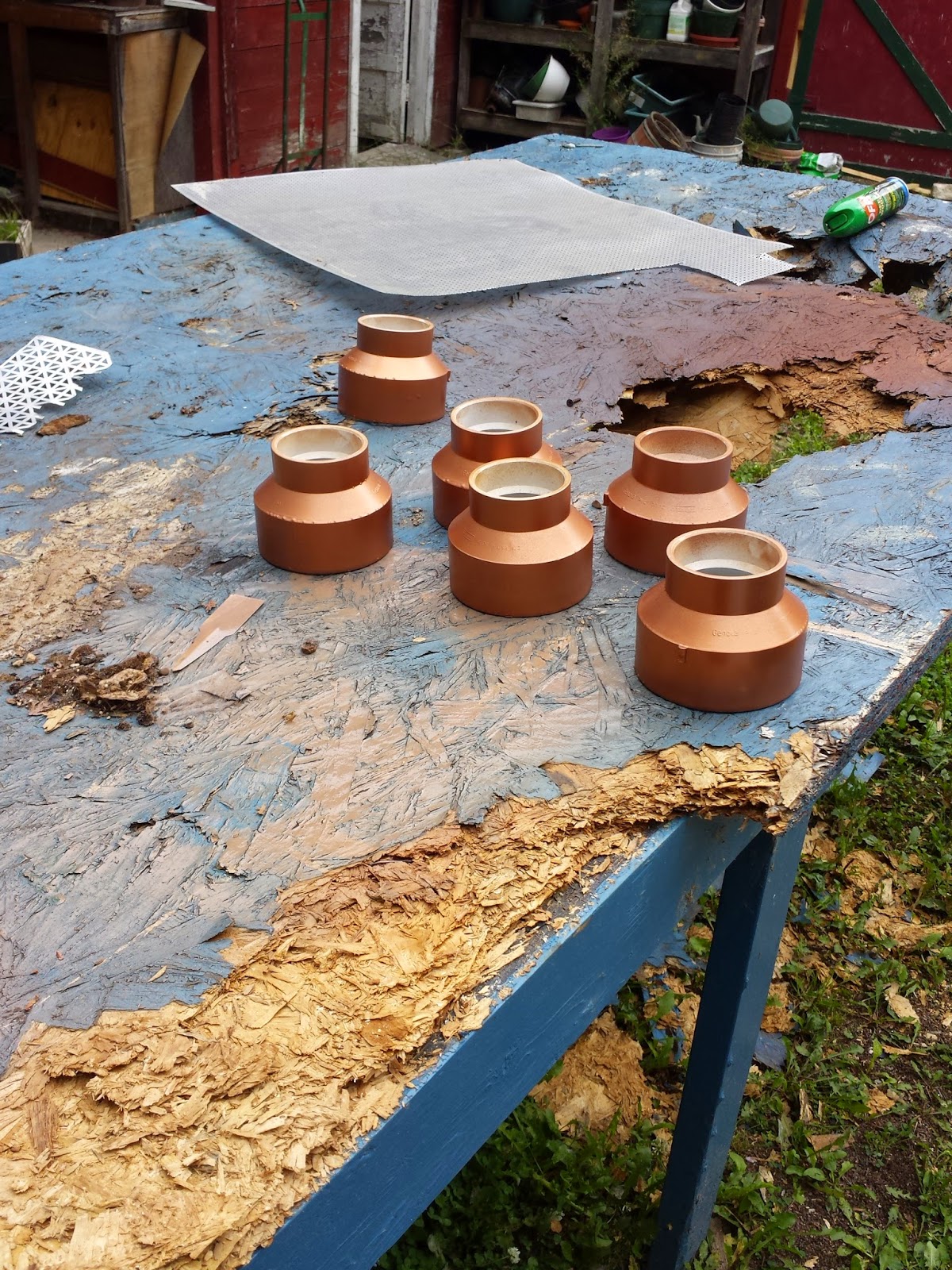 And used liquid nails to attach them to the lamp bases. This stamped metal grating is available in many hardware stores and is often used for radiator covers. I cut narrow strips of it, and then cut a pattern into the top. Then we wrapped it around the PVC pieces and secured it with a couple screws through the grate and into the PVC on the back side. 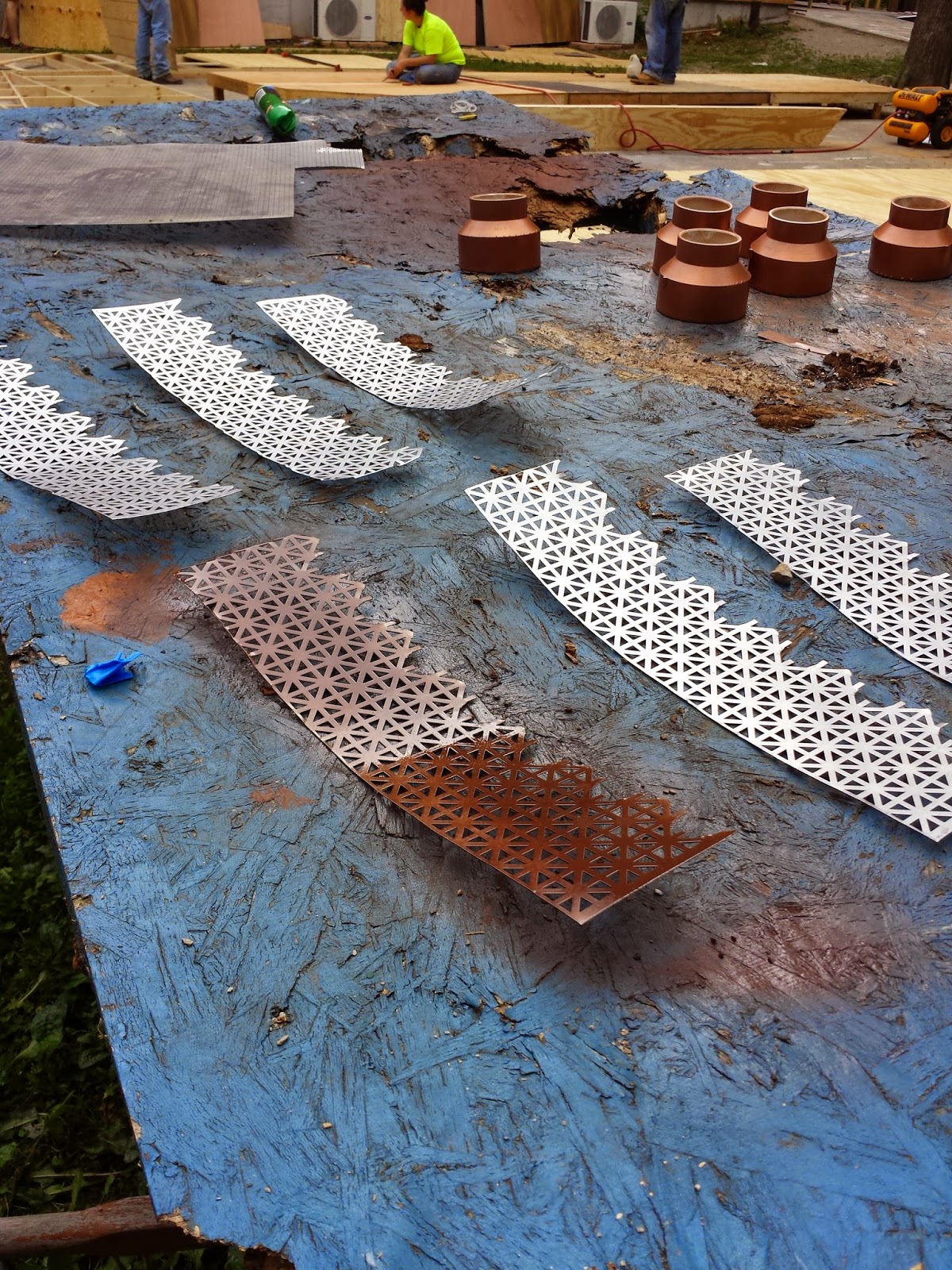 To finalize the base, we needed one more horizontal layer. We cut some ethafoam insulation into quarters and painted it brown. Ethafoam does not take paint well, but I had heard that you could prep it for paint by spraying it with spray adhesive and then letting it dry completely until it isn't tacky anymore. I tried that this time and it worked beautifully. 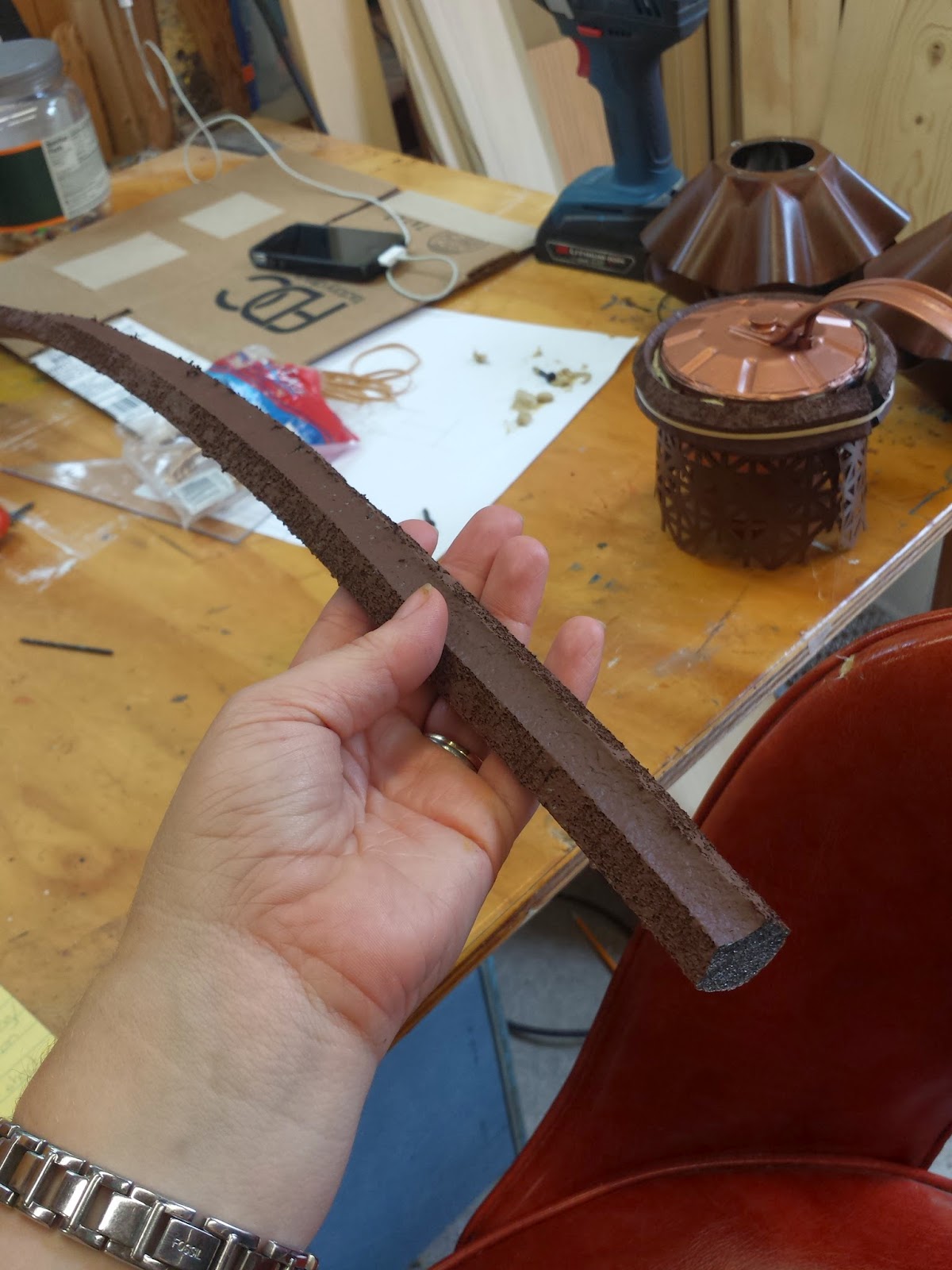 I secured the ethafoam with more liquid nails (and a rubberband to hold everything in place while the glue dried), and the base of the sconce was finished. 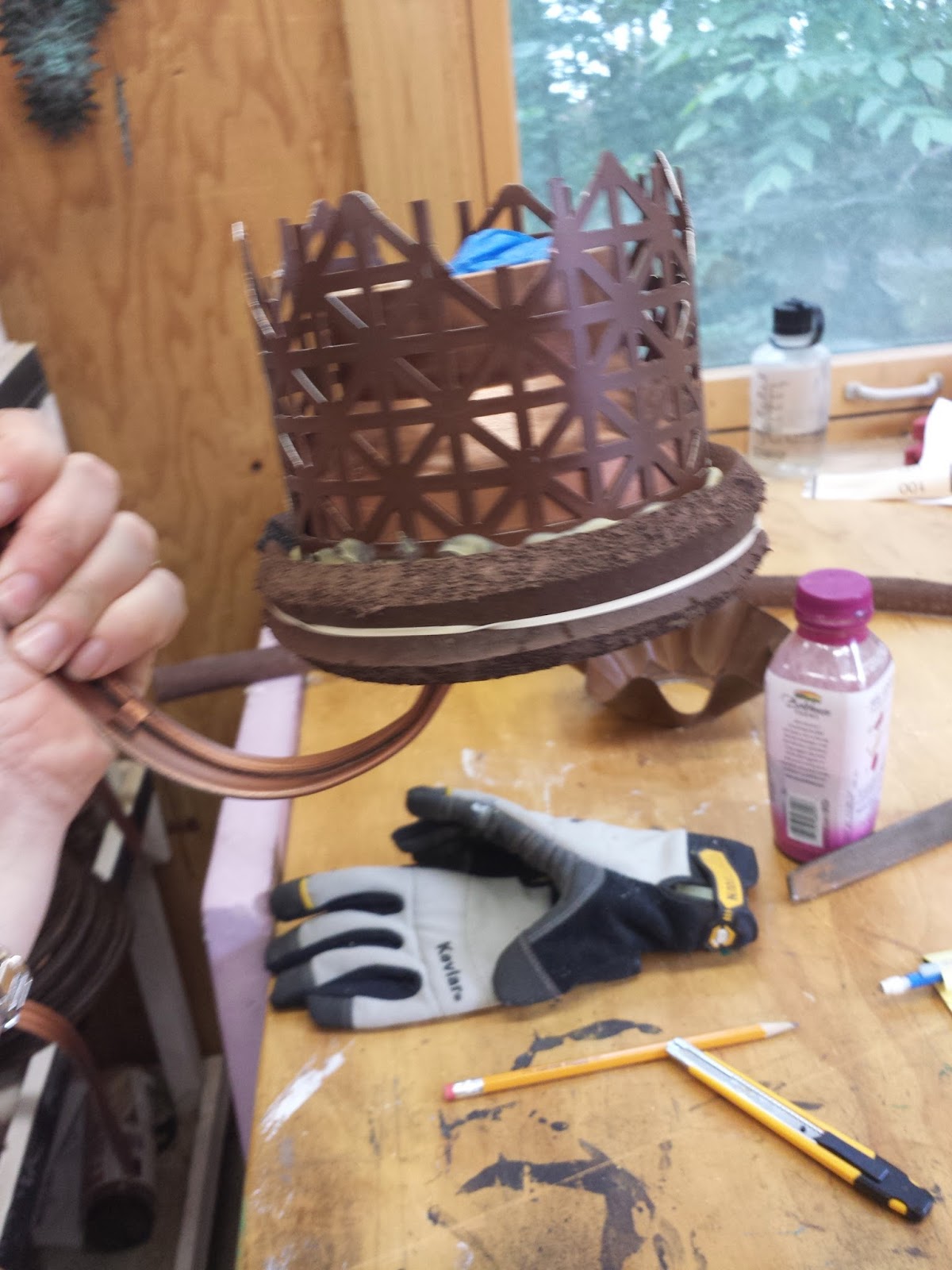 For the shade of the sconce, I found these little tin bowls online. 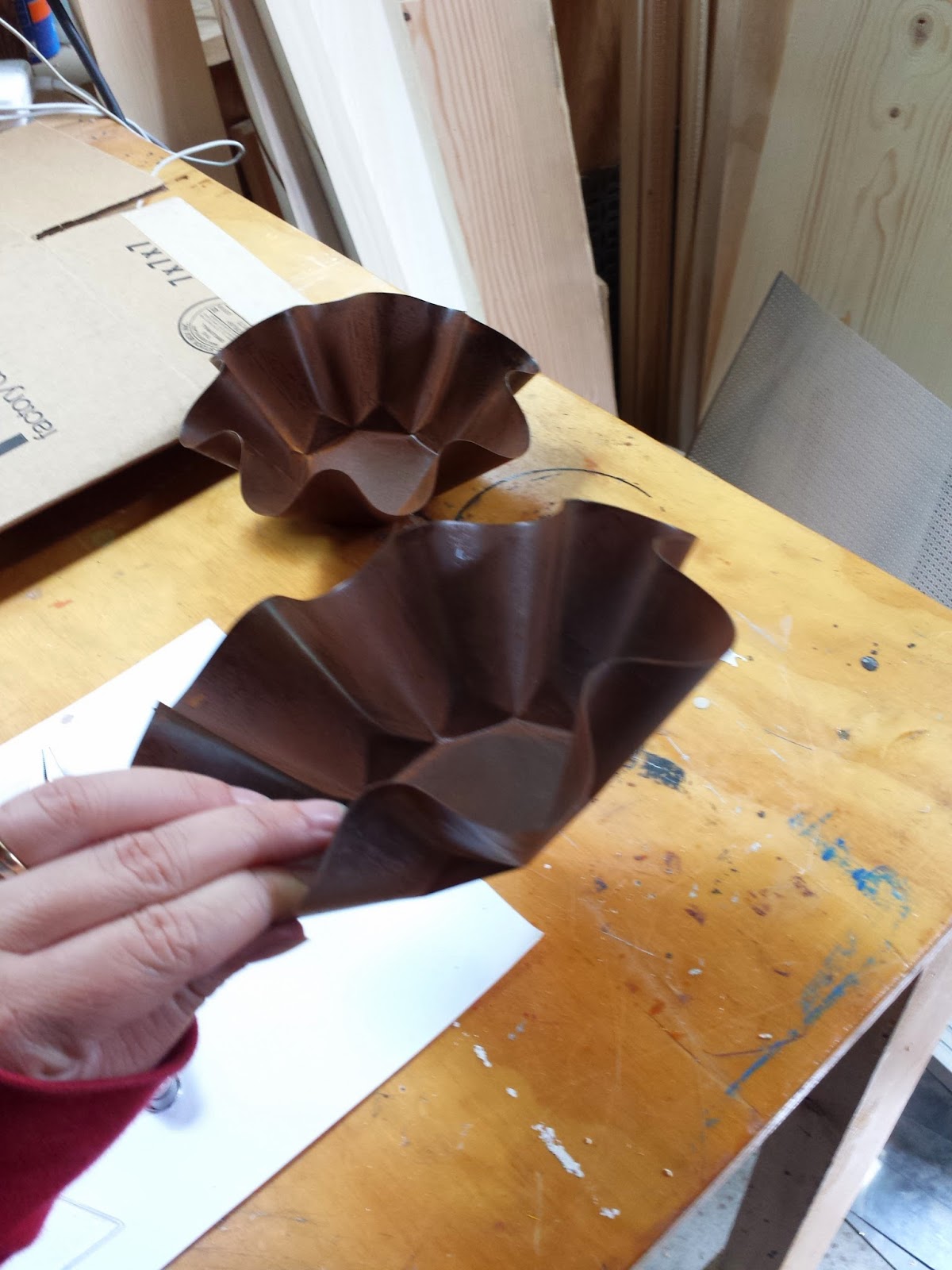 We used a hole saw to cut a circular opening in the top and placed it on a stock glass hurricane. 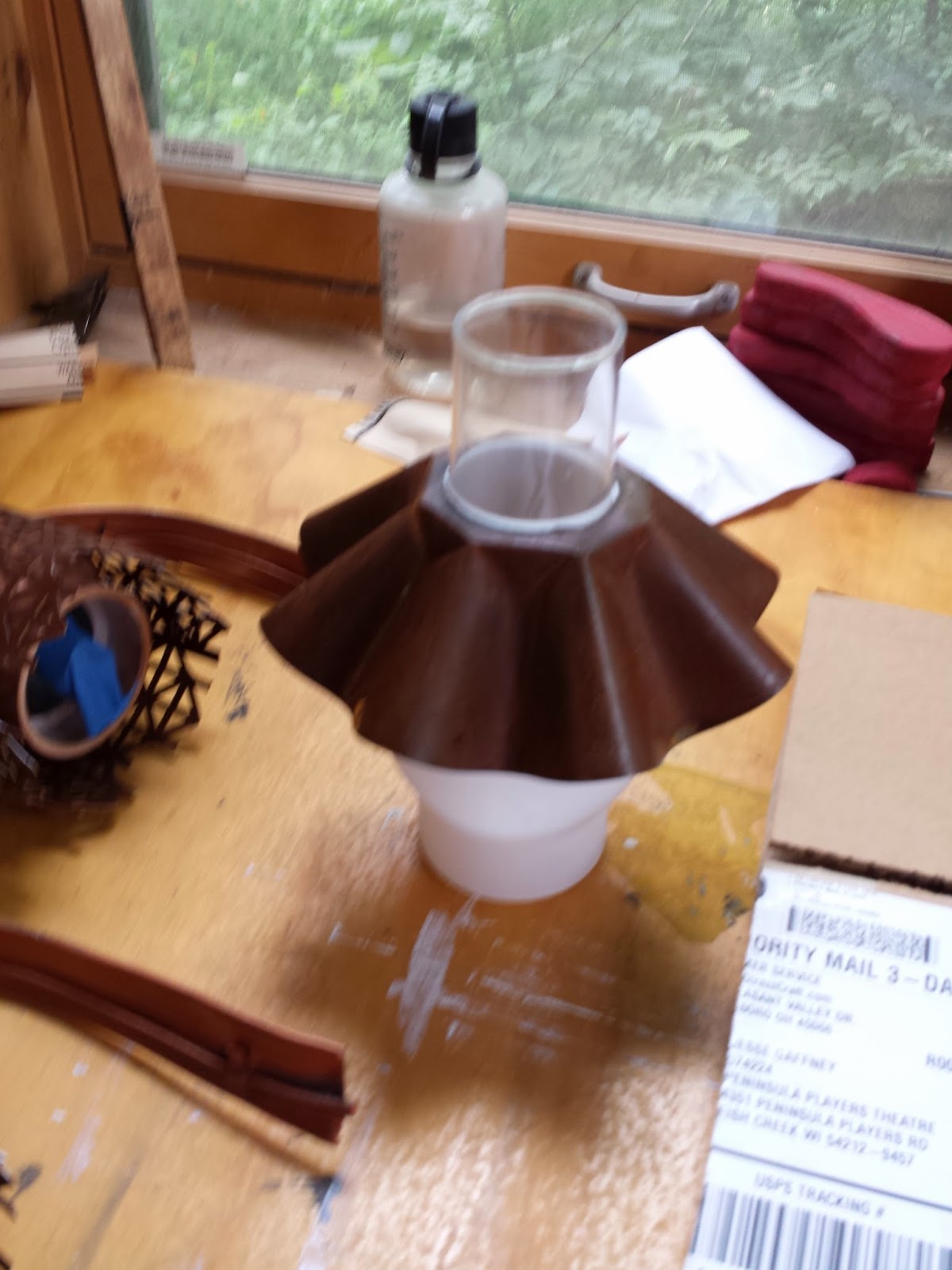 Finally we needed to mount the sconces to the wall. We cut six plywood circles and used the router to create a detailed outside edge. 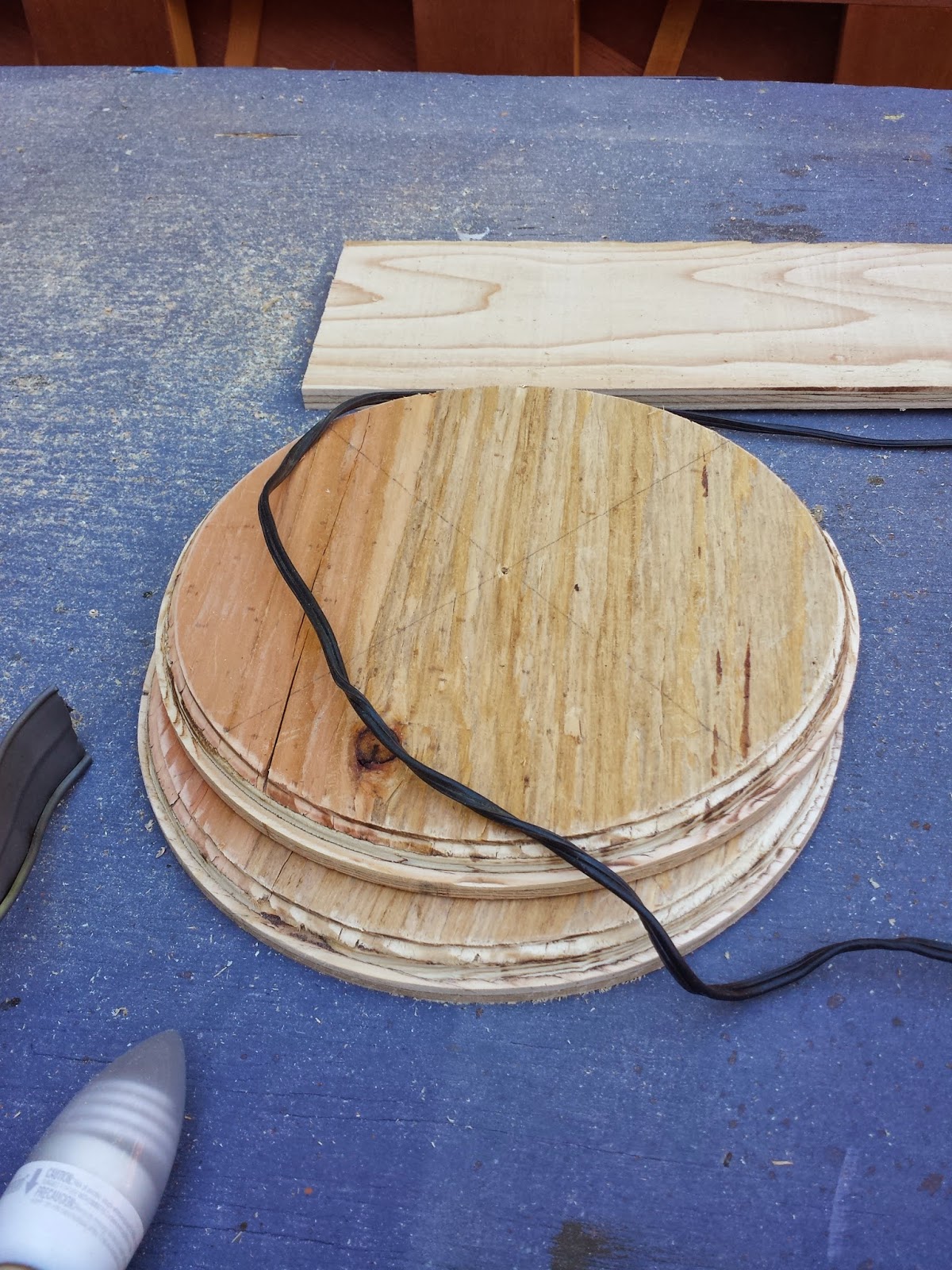 Then cut out the individual spokes of a wagon wheel. The metal chandelier arm was able to attach to the back side of the wagon wheel with a couple screws, and then we only needed one screw through the front when it came time to attach the sconces to the walls of the set. 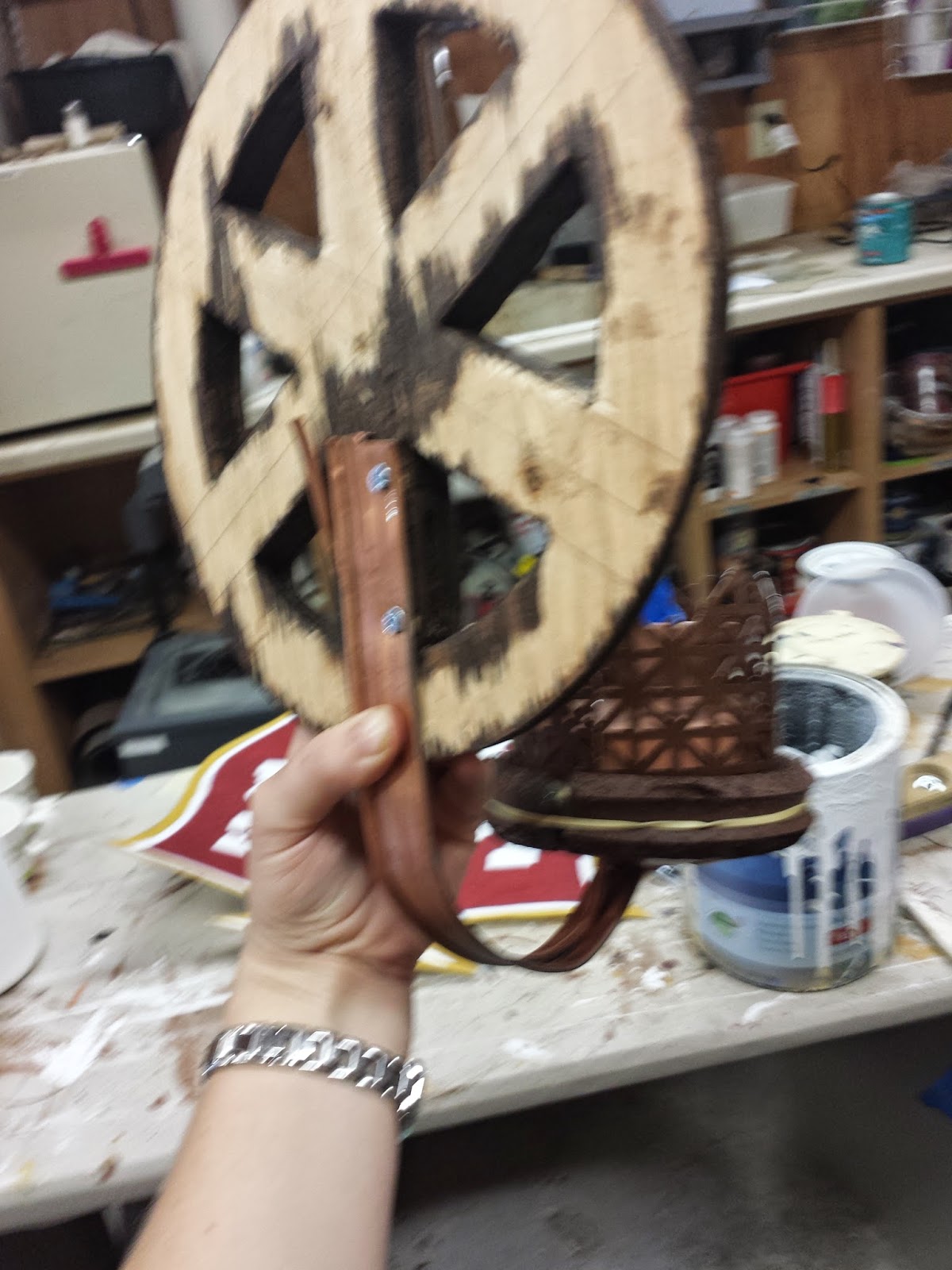 And here is the finished product, installed and all lit up. I think they are kind of hilarious and adorable. 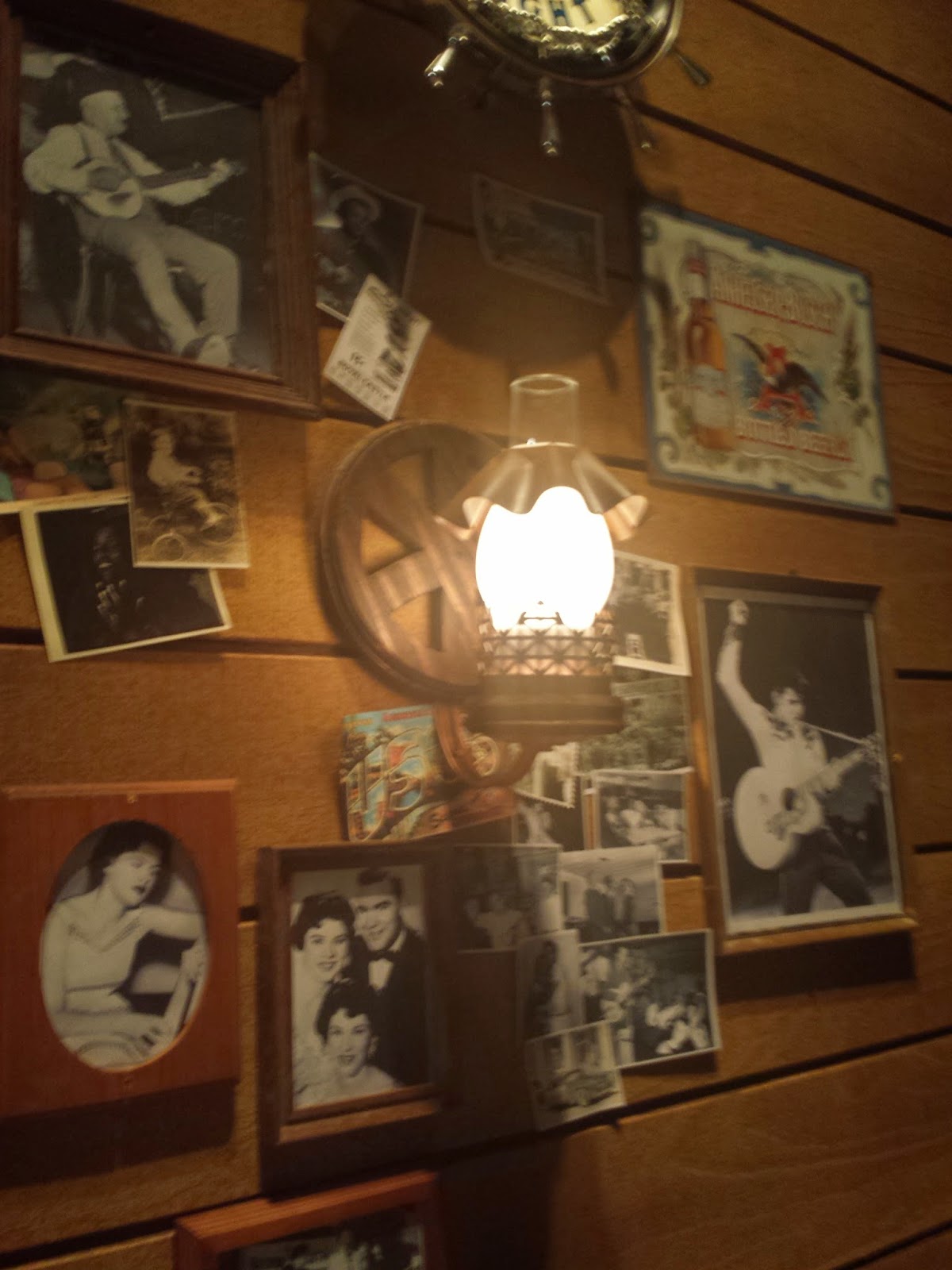